Today is International Women’s Day, and, considering that, we would like to draw your attention to Carmen E. Turner and celebrate the work she did for women and people of color as the first Black woman to head a major urban transit system.

She broke into government service as a typist and between 1970 and 1977, Turned worked on civil rights and equal opportunity programs for the Department of Transportation (DOT) as the director of civil rights. Her groundbreaking worked paved the way for future generations of women and people of color; for example, she made it possible for women members of the Coast Guard to be allowed to serve on the shipboard. She was constantly praised for her empathy, creativity, and productivity in this role.

After her stint at the DOT, Turner joined the Washington Metropolitan Area Transit Authority (WMATA) as chief of administration and in 1983 became general manager, becoming the first Black woman to head a major urban transit system. Her appointment to this role was a turning point for increasing gender diversity in leadership roles in US Transportation. During her seven-year tenure with WMATA, Turner managed political and financial hardships while also expanding the Metro from 42 miles and 47 stations to 73 miles and 63 stations. She was commended for running, at that point, the country’s second-largest rail and fourth-largest bus transit system, managing 7,000 employees and operating 2,000 buses and rail cars.

In 1988, Metro was named the country’s best public transportation system by the American Public Transit Association and in 1989 they also awarded her with the “Transit Manager of the Year” distinction. One of the major highlights of her career came the following year, when Congress authorized $1.3 billion for finishing the 103-mile system. In 1990, Turner left Metro to become Under Secretary of the Smithsonian Institution, but, unfortunately, Turner was diagnosed with breast cancer and passed away in 1992.

Her lasting impact is felt to this day; she spearheaded the implementation of equal opportunity programs, prioritized attracting diverse audiences, led a study of the Smithsonian, and fought to make more inclusive spaces for teenagers. 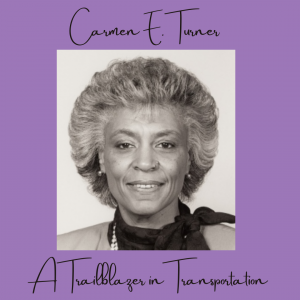 Learn more about her here.